One Medicare (owned by One Medical) with much fanfare and glossy leaflet drops opened Sheffield's GP Polyclinic or Super Surgery in April 2009 that offered 7 days per week access from 8am to 8pm, situated near the centre of Sheffield on the corner of Rockingham Street and Broad Lane. The centre publicised that it was open to any person to walk in off the street and see a GP or nurse without a prior appointment (allow upto 3hours waiting time) and those choosing to register with the surgery would receive full NHS services, thus offering an alternative to patients stuck in the catchment areas of Sheffield's bottom ranking GP Surgeries. 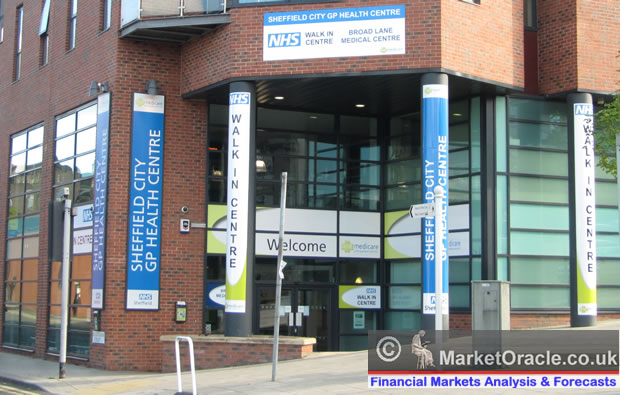 Parking - One of the drawbacks to the GP centre is that drivers will need to pay for parking, the nearby car park charges for Monday to Saturday 08:00 to 18:30 :

In the surgeries first year of operation the Department of Health funded UK GP Survey results for 2009-10 showed that 95% of registered patients where satisfied at the overall quality of care received, ranking the surgery at 18th out of 92. However, patient satisfaction continued to deteriorate significantly during the subsequent 12 months to March 2011 to rank the GP surgery at 66th out of 92,(see table at end of article). The GP Survey results to March 2012 will be analysed and published when available, which this review is in advance of as a summary of what patients can expect based on real experience of using the GP Surgery services as a registered patient for 6 months over a number of consultations as covered in detail in November 2011.

This highlights the danger of letting the private sector contract for the NHS as without competition for patients between GP Surgeries then there is no incentive to deliver satisfactory GP or any other health services as monopolies will seek to maximise profits such as cutting costs by contracting cheaper locum GP's.

Patients should aim to register with GP practices that rank in the top 1/3rd of GP surgeries as per the UK GP Patient Survey so as to increase the probability of being in receipt of satisfactory GP health services. However the flaw here is that GP practices operate as monopolies without competition that do not allow patients to register from outside of catchment areas, which means you will likely have to move house to register with a 'good' GP surgery, hence an example of the NHS post code lottery.

An alternative is to pay for private GP consultations and referral which could prove costly (especially the referral and resulting treatment) which would mean that patients are effectively being FORCED TO PAY TWICE FOR HEALTHCARE. Also private medical insurance can turn out to be worthless in many cases given the multitude of small print get out clauses contained within.

In terms of the big picture, One Medicare highlights the problem at the root of the NHS that the governments reforms of letting private sector firms take up GP practice delivery is the lack of a market for patients, and not for services. For if there is no real competition between GP surgeries for patients then the patient will NOT come first, no matter who is delivering the service.

The core at the heart of Coalition Government's NHS reforms is to scrap ALL NHS Primary Care Trusts (PCT's) to be replaced by competing GP Consortia's to directly manage patient treatment commissioning (the process could fully take 2 years to implement, subject to revisions).

Unfortunately whilst the aim is for better value for money by means of competing consortia's, the implementation is proving to be resulting in the exact opposite anti-competitive consortia's, as virtually all of the Sheffield NHS 92 GP Practices have signed up with one of of 4 geographically located GP Consortia's in advance of the implementation of the Coalition Governments NHS reforms.

The flaw in the construct of the consortia's is that there is nothing to suggest that the consortia's and GP surgeries will be competing for patients which therefore means the governments planned reforms will fail and patients could end up with even worse health services as GP surgeries will be wielding greater power within their geographic constructed Consortia's then they were able to wield under the city wide Primary Care Trust, therefore no competition in GP services will exist and the governments reforms are destined to fail just as badly as Labours 2002-2003 GP contracts failed as they sent annual GP pay rises soaring into the stratosphere, culminating in pay rises of more than 30% per annum. 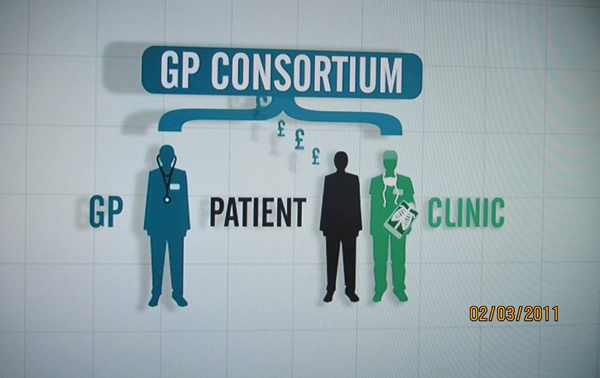 The bottom line is that without real competition between GP surgeries for patients then there is nothing to drive improvement in the quality of service delivery as patients have little or no choice to register with a better performing surgery, so not only do the worst performing GP surgeries continue to operate indefinitely to the detriment of their patients health but also all surgeries are gravitating towards the lowest common denominator of increasing costs and falling productivity that results in the NHS's high internal price inflation of approx 8%, all coupled together are presenting private companies such as One Medicare with highly profitable opportunities.

Therefore the government reforms are the worst of both worlds, i.e. which will ultimately allow private companies to increasingly operate not just GP surgeries but also GP consortia's eventually containing hundreds of GP surgeries in ever expanding regional blocks. Instead the exact opposite should be taking place where patients should be allowed to register with ANY GP surgery which would result in every surgery having to compete to retain patients through improving the quality of service they offer, this off course is something that GP's would never sign up to, instead as the Channel 4 investigation reveals they are signing up to become shareholders of profit led dividends paying consortia's, where patients are seen a cash cows to milk for maximum profit. And eventually over time all of these consortia's will either go public by floating on the stock market or be taken over by large corporations resulting in huge windfall profits for the shareholding GP's. 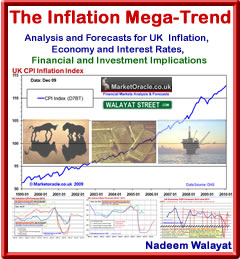